Scroll to Top
Categorized as
3278
Related

Does your poor, beloved dog have itchy skin that just won’t seem to go away? The good news is you’ll be able to easily diagnose what’s causing the itching; the hard part is treating it the right way! To help you, read on to learn what you can try to cure your dog’s itchy skin: 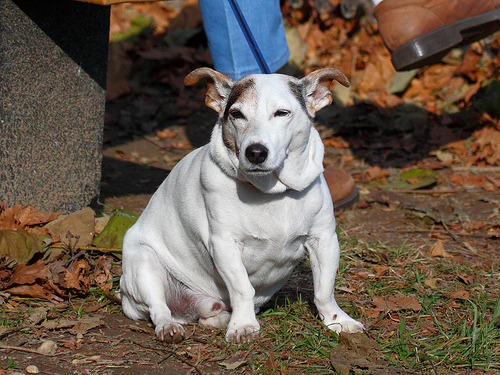 There are many different treatments and causes for dogs who itch, scratch, and bite their skin. In many cases when a dog chews and scratches itself to such an extent, it’s referred to as “summer itch hot spots”. This is where the dog itches and scratches himself until he has caused damage to his skin, probably creating an open wound or causing an infection. The problem with treatment for summer itch hot spots, is that it only treats the open wound itself and the infection if there is one, and not the cause of the itching.

Other dog skin conditions that can cause severe itching and scratching are; eczema, pyoderma, seborrhea, allergies to food and grass, fleas, yeast infections, and more.

Don’t worry, ringworm isn’t a worm; it’s a fungus. This causes itching, scabbing, and hair loss over your pet, but be careful as it’s easily transferred to other humans and pets. Ringworm needs to be treated with a fungicide – most athletes foot creams are effective.

You can diagnose mange and mite infections using skin scrapings. Fleas and mange can usually be successfully treated with insecticides. However, there are many different types of mange, and some are much more serious than others. Demodectic mange isn’t very contagious, while sarcoptic mange is very contagious and can even cause death in some dogs. The infestation in the dog needs to be eliminated to avoid infestation of humans and other dogs, as well as possible infestation in the dog’s environment.

If your dog has hair loss problems, this could be due to thyroid issues, not chewing, itching, and scratching. It’s like the dog version of alopecia.

Usually, it’s best if you take your dog to a proper vet for a diagnosis rather than doing it yourself, as you don’t want to diagnose him with the wrong thing and end up giving him the wrong treatment. You can then get recommendations on what to give your dog to treat his problem, and could even be referred to a store that specialises in dog shampoo and skin conditions in dogs.

One thing that could help regardless of your pet’s problem, is changing his food to an organic version that is high in protein but low in carbs. A lot of dog foods in the supermarkets can include bad ingredients, similar to feeding your dog pop tarts for breakfast, so do your research on good, healthy dog food to see if he improves. A dog is part of the family, so make sure you treat him with the love and care he deserves!