Scroll to Top
Categorized as
1514
Related

Recent innovations have led to a trampoline design that finally fulfills longstanding consumer demands for higher levels of safety. Traditional trampoline designs have resulted in millions of injuries over the years with pediatricians and chiropractors issuing numerous warnings. Now, a new design is entering the market, and these trampolines are not only safer – they’re smarter.

Popular trampoline manufacturer Springfree has paired up with the tgoma digital game system to deliver the world’s first Smart Trampoline. Now, each purchase comes equipped with a device that attaches firmly to the side of the trampoline, using Bluetooth technology and sensors built into the mat to track motion. Once the system is downloaded, the device will record jumps, allowing players to compare and compete for high scores. This is the perfect incentive to get you or your child outdoors and exercising – the goal is to shift playing habits from those that are isolated and inactive to those that are physical and interactive. In fact, the combination won a 2016 Digital Design award at the Australian Good Design Awards. 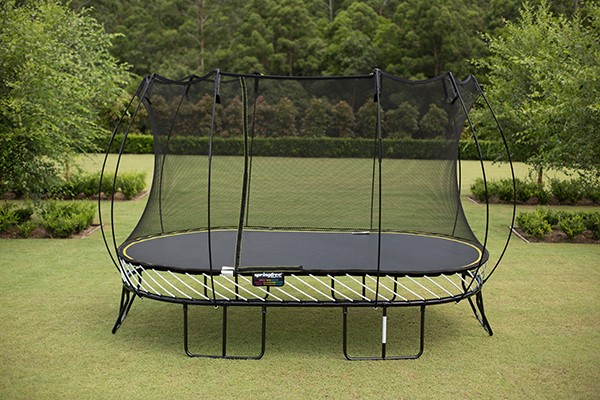 These trampolines are among the most highly regarded in the industry, with numerous consumer awards to back up their reputation. This includes The Parent Tested Parent Approved Award, The US Family Choice Award, and International Design Award. Their unique design identifies three major impact points on a standard trampoline, and creates barriers that improve user safety without impeding functionality. Basically, they’re safer but just as much fun. Major impact zones of traditional trampolines include the metal frame, the exposed springs, and the ground. First, Springfree Trampoline USA removes the springs entirely, replacing them with a ring of flexible composite rods. They bend easily under pressure so there is less risk of snapping or breaking. The rods are situated beneath the jumping surface where they cannot collide with jumpers and cause injury. If jumpers trip or vault too far there is a FlexiNet around the jumping area to catch them, supported by flexible rods as opposed to rigid metal ones. Both components of the net enclosure are composed of lighter but stronger materials than the ones used in traditional spring trampolines. The framework that holds all this together is called a hidden frame. Thanks to the composite rods, the metalframe of the trampoline no longer needs to support the springs from the outside. Instead, the hidden frame allows all metal components to be hidden underneath the jumping area so that there is minimal risk of contact or injury. This is enhanced by the presence of a SoftEdge Mat, which is highly shock absorbent.

As an additional safety precaution the manufacturer makes a point of never outsourcing when it comes to component construction. Every piece of the trampoline is manufactured at a single, centralized facility. There it is tested thoroughly so that you can be sure every aspect complies with industry safety standards. Remember, if you purchase a trampoline be sure to choose the one that will put the health of you and your family first, the addition of a tgoma game system however doesn’t hurt.